You are here: Home / Archives for artillery shelling 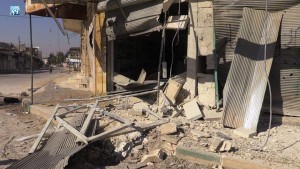 The regime forces stationed in the eastern countryside of Idlib targeted the town of  Jarjanaz in the suburbs of  Ma’arat al-Nu’man with 15 artillery shells, killing 8 people and injuring several others. The attack occurred as worshippers were performing Friday prayers. 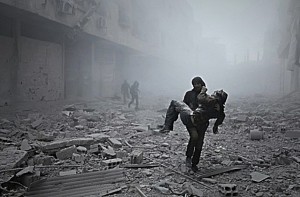 The total number of victims SHRC was able to document in Syria on Friday 26/10/2018 reached 7 persons, including 3 children and 3 women. In the province of Idlib (7) people were killed due to artillery shelling by the regime forces targeting the town of al-Raffah in the southern part of the province. The Human […]

The number of victims SHRC managed to document in Syria on Sunday 17-6-2018 reached 3 people amongst them 1 child. In Hama province 1 person was killed because of artillery shelling of Martyrs graveyard in Latamneh city on Friday early morning, 15th June. In Deir ez-Zor province a man was killed by the Kurdish militia […] 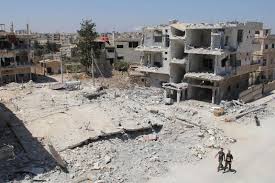 On Thursday morning (22-3-2018), the media Activist Shuhaib Oyoun (abu albara’a) was killed during executing his work in a popular market in Douma, Eastern Ghouta, Rif Dimashq. He was killed due to the intensive and brutal bombardment with Fozdika shells SHRC 22-3-2018

The total number of victims (which we were able to document) in Syria on Wednesday 01/11/2017 reached 19 deaths including two children and four women. In Deir Azzour, 16 civilians were killed; ten in warplane shelling on the towns of al-Sayal, al-Sawi’ya and al-Ghabra, three in artillery shelling from the Iraqi side in the […]

The death toll in Syria on Monday 25/09/2017 reached 64 deaths including 16 children and seven women. In Idlib, 39 civilians were killed, 38 in Russian shelling on the cities and villages of the province, among them 17 in Jisr al-Shaghour, and one suffered a heart attack as a result of repeated air raids […]

The death toll in Syria on Sunday 24/09/2017 reached 28 deaths including three children and six women. In Idlib, 12 civilians were killed in Russian shelling on the villages of Tal Mardeekh and al-Sheikh Sandiyan, the city of Khan Sheikhoun and rural Saraqib. Furthermore, five were killed in Hama, three in artillery shelling on […]

The death toll in Syria on Monday 11/09/2017 reached 50 deaths including three children and seven women. A staggering 45 civilians were killed in Deir Azzour; 34 in warplane shelling on the river crossing in the village of Hawaij Diab Shamia, the displaced camp in the village of Zaghir Shamia, the vicinity of the […] 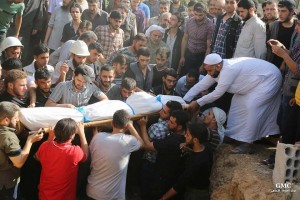