You are here: Home / Archives for artillery bombing 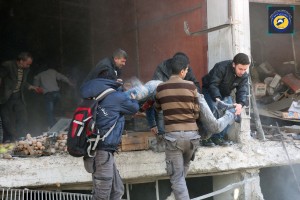 The death toll in Syria on Monday 20/07/2015 reached 64 deaths including seven children, six women and one killed under torture. In Aleppo, 40 civilians were killed; 26 in vacuum missile shelling on Manbaj (rural Aleppo), nine in shelling on Kafr Da’il and the village of al-Imam, three in a car bomb explosion on […]