You are here: Home / Archives for arrests

The death toll in Syria on Sunday 02/07/2017 reached 20 deaths including eight children and two women. In Ar-Raqqah, nine civilians were killed, seven in international alliance shelling, and two shot by Qasd militia sniper. In addition, two died in Daraa, one as a result of indiscriminate shelling on al-Sanmeen, and the other in […] 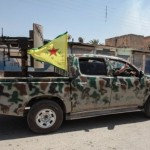 The total death toll in Syria on Thursday 30/10/2014 reached 49 deaths including a woman and 31 civilians killed under torture. In the capital Damascus and its suburbs six were killed; four in shelling on Ain Tarma in the suburbs and two were shot by government forces. In Homs 29 civilians were killed; one in […]

Despite how large and wide-scale the issue of enforced disappearances is in Syria, the numbers and statistics provided by human rights organisations- both Syrian and international- remain approximate, with differences between them sometimes reaching 100%, and no organisation being able to reveal the names of all those released. This is due to many reasons, some […]

Posted: 22 May 2013 A prominent Syrian human rights lawyer who went missing at the weekend after an apparent abduction is at grave risk of abuse, Amnesty International has said. Abdullah al-Khalil, who became head of the local council for al-Raqqa Governorate after armed opposition groups took control in March, was reportedly taken away by […]