You are here: Home / Archives for al-Zaza 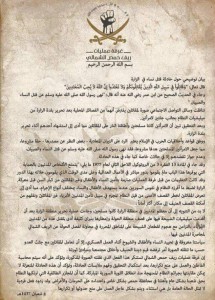 On Thursday 12/5/2016, groups of the Syrian armed opposition gained control of al-Zaza village in northern rural Homs. Shortly after the capture of the village, regime sources announced that the Syrian opposition had committed a massacre in which it killed 19 civilians of the village. Al-Zaza is situated in northern rural Homs. The majority of […]