You are here: Home / Archives for Al-Qaryatayn 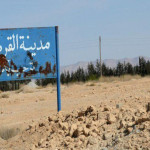 The residents of Al-Qaryatayn city, in the Eastern Homs Province, found the dead bodies of over 70 people after ISIS withdrew from the city. The victims were slaughtered with knives or shot dead within close proximity. On Friday 29/09/2017, ISIS broke into the city that was under the regime’s control and forced the residents to stay within […]