You are here: Home / Archives for Al-Jedar 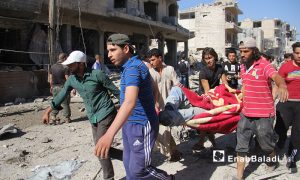 Regime and Russia shelling of  Ma’rat Al-Nu’man caused fatalities  The total number of victims documented in Syria by the Syrian Human Rights Committee on Friday 13th September 2019 reached 7 people, including a child, a woman and one killed under torture. In Idlib province, 6 people were killed due to shelling in Ma’rat Al-Nu’man, Kafrnabel […]