You are here: Home / Archives for air raids 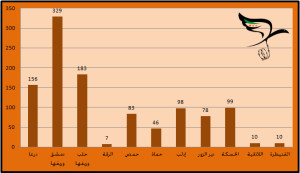 The Syrian Human Rights committee documented the killings of 1101 civilians in January 2015 in various Syrian provinces. The majority were killed as a result of air raids, especially with explosive barrels. While the severe weather conditions that Syria underwent at the start of this month, led to the deaths of 52 civilians.Moreover the siege, […]

The total death toll in Syria on Sunday 4/1/2015 reached 17 deaths including a woman. The city of Douma (rural Damascus) witnessed several air raids and missile strikes which led to destruction at the Grand Mosque, also a car bomb explosion coincided with the aerial bombardment, where three civilians were killed. In addition a civilian […]

The total death toll in Syria on Tuesday 23/12/2014 reached 69 deaths including 19 children, seven women and two under torture. In the capital Damascus and its suburbs 14 were killed; seven in shelling, three in clashes with government forces and one was shot by unknown assailants in Yarmouk camp. Ar-Raqqah witnessed the killings of […]

The total death toll in Syria on Sunday 16/11/2014 reached 30 deaths including four children, a woman and 15 killed at the hands of ISIS. In Ar-Raqqah province 15 civilians were executed in the city of al-Tabqa at the hands of ISIS under accusations of espionage and dealing with government forces. In Daraa six were […]

The total number of deaths in Syria on Tuesday 7/10/2014 reached 34 deaths including two children, a woman, two killed under torture and one killed at the hands of ISIS. In the capital Damascus and its suburbs ten civilians were killed; eight due to clashes between the opposition and government forces, a woman died in […]

One hundred and twelve civilians were killed in Syria on Saturday 12/10/2013, among them six women and 15 children. The largest number of those killed was documented in Damascus and its suburbs, in which 33 were killed, among them seven from al-Qadam who were killed in the clashes and shelling which targeted the neighbourhood. Five […]