You are here: Home / Archives for air raid 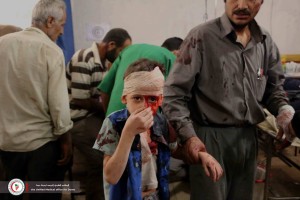 War planes launched an air raid on the city of Douma, targeting the popular market of the city (Souq al-Haal) and leading to the death of at least ten people. The medical point of the city received up to around 100 injured people, among them many cases which require extreme care and surgery. 1. Mansour Jasim […]

The number of those killed in Syria on Sunday 29/9/2013 reached a toll of 82 deaths, among them four women and 18 children. The highest number of deaths were recorded in Damascus and its suburbs in which 35 were killed, 11 of whom were killed in the village of Al-Bahariya in rural Damascus, five in […]