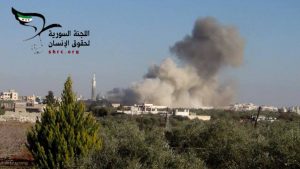 Today, Thursday, January 19, 2023, al-Assad forces targeted residential neighbourhoods in the village of Qastun in the western Hama countryside, wounding five civilians, including three children, one of whom is in a critical condition. The civil defence team headed to the site of the bombing, secured it, and transferred the injured to the local hospital, to receive the necessary treatment.

Names of the injured:

A girl whose name to be identified

The villages of Al-Barra in the southern countryside of Idlib, and Tadil, Bahfes and Kafr Ta’al in the western countryside of Aleppo were also subjected to artillery shelling, causing significant material damages.

We, the Syrian Human Rights Committee call on the international community, particularly the United Nations and the Security Council, to take effective and serious action to stop the crimes committed against Syrian civilians by Russia, Iran, the Assad regime and their supporting militias, to refer the perpetrators of these crimes to international courts, and to implement international resolutions on Syria, especially resolutions 2118, 2254 and the Geneva Declaration and other relevant resolutions, and achieving a real political transition that fulfills the aspirations of the Syrian people and establishes a regime who respect the rights citizens and enforces law of equality and justice.