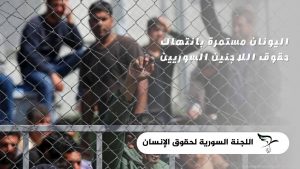 Activists recently circulated a video that spiraled in social media and exposes glimpses of Greek authorities grave abuses against Syrian asylum seekers, it shows how the Greek authorities turned a warehouse in a countryside spot on the outskirts of Taichiro village a few KMs from Evros river that separates turkey from Greece, into a prison.

One of the Syrian refugees held at that prison succeeded in smuggling and concealing his mobile phone which enabled him of secretly filming the prison, that video revealed pictures of the detained refugees who were subjected to multiple abuses including striping, confiscating of properties, beating, depriving of food and drink as well as humiliating and other moral abuses before throwing them to the other bank of the river.

It’s worth mentioning that Evros river that runs for 530 KMs is one of the main asylum seekers routes linking Edirne city at the north in the European side of Turkey with Greece.

In addition, the Greek authorities installed two electronic apparatuses both of which capable of transmitting extremely high sound waves that cause deafness to use against the refugees who attempt to cross to the Greek land in the meadow area at the border with Turkey. Both of the apparatuses are fitted with instrumental techniques operating according to far reaching sound waves (LRAD), used in civil and military applications all over of the world. Using such techniques and mechanisms against individuals causes deafness and other grave health problems.

There is a growing number of damning reports of Greek authorities putting in place callous asylum and immigration policies. Among such tactics the Greek try to drown the refugees by sinking their boats with sharp tools, using excessive force, shooting at them with live bullets, intimidations during the push back operations, all of which reveal serious violations of human rights. The Greek authorities employ such aggressive, and illegal tactics to keep asylum seekers and migrants away.

In the meanwhile amnesty international assured that the Greek border guards illegally hold groups of refugees and asylum seekers and treat them brutally and violently before returning them to Turkey, a matter which constitutes a serious failure to meet its obligations towards the European and universal human rights conventions.

The human rights spokeswomen in the European council also called on Greece to open an investigation concerning these allegations of Greek abuses and aggressiveness at the Turkish border, amidst a pile of information confirming that such abuses became (well established practices).

Mr. Juan Lopez, head of the civil liberties committee in the European parliament, drew the attention in his letter to the commissioners Margaritas Schinas , Vera Jorufa and ylva Johansson in the European commission, to the fact that dozens of those who sought asylum and international protection were driven away and returned back to Turkey from the land border of river Maritsa. Lopez also confirmed that the situation deteriorated even further during the past few months, he raised the alarm that the life loss and inhuman treatment and prevention of the means of getting access to asylum procedures seekers and the compulsory push backs and refoulement operations have increased and that the situation is getting so dire indeed, especially so when we know for sure that such violations do occur with the help of Greek police officers at the fringes and the outer borders of the European Union, Lopez called on the European Union commission to stand up and bear the responsibility and condemn any use of violence against asylum seekers.

Greece’s refugee policies constitute a breach of its international legal obligations as Article 14 of the Universal Declaration of Human Rights states that everyone has the right to seek and enjoy asylum in other countries for freedom from persecution, and Article 3 of the International Convention against Torture and Other Cruel Treatment or Punishment, or Inhuman or degrading treatment, which states that no state party may expel, return or extradite a person to another state, if it has real grounds to believe that he would be in danger of being subjected to torture, and articles 2 and 3 of the European Convention on Human Rights which provide for the right to life of every human being, without being subjected to torture or humiliating treatment, as they violate the principles of international humanitarian and customary law and Protocol I of the European Convention on Human Rights.

Forced returns also violate many human rights standards, including the prohibition on collective expulsion under the European Convention on Human Rights, the right to due process in the International Covenant on Civil and Political Rights, and the right to seek asylum under EU asylum law and the EU Charter. .

We at the Syrian Human Rights Committee call on the European Court of Human Rights to open an investigation into the Greek authorities’ violence and illegal practices against asylum seekers at its borders with Turkey, and to investigate refugee prisons on the borders.

We call on the Greek authorities to abide by international conventions, stop threatening the lives of Syrian refugees fleeing by land and sea to Europe, and allow them to cross to their destination to obtain a measure of safety and resume a fruitful life, and to release the refugees arrested immediately.

We also call on the European Union to find a practical mechanism to deal with the refugee crisis, to ensure a dignified treatment of refugees, and to monitor violations that occur in the countries receiving them.