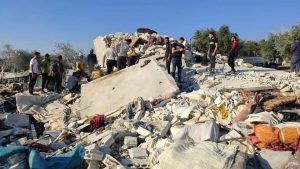 Victims of Human Rights in Syria in July 2022

The Syrian Human Rights Committee (SHRC) documented the killing of 109 people in Syria during the month of July 2022, including: (23) children, (9) women, and (3) died due to torture.

SHRC documented the killing of (35) persons as a result of assassination by unknown persons, (9) persons due to landmines, and (8) persons due to the explosion of IEDs and the remnants of the bombing. SHRC also documented the discovery of the remains of (30) people in a mass grave that was discovered near a hotel in the city of Manbij in the northern countryside of Aleppo, which ISIS turned into a prison during its control of the city between 2014 and 2016.