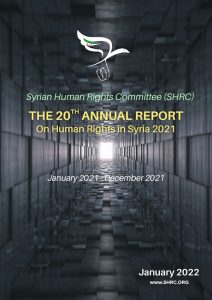 The Syrian Human Rights Committee (SHRC) has issued its 20th report on the human rights situation in Syria. The report documents in detail the violations that Syria witnessed during the year.

The report documents the death of 1237 people in 2021, wherein the governorate of Daraa exceeds all other governorates in the number of victims, followed by Deir ez-Zor, thereafter Aleppo and Idlib.

With the gradual decline in the number of casualties in Syria over the past years, the direct responsibility of the perpetrators has also declined. SHRC’s documentation reveals that the Assad regime along with its foriegn allies in the first place, and the  Syrian Democratic Forces (SDF), ISIS and the international coalition to a lesser degree, and then other actors were all officially responsible for a total of 48% of the victims that fell in 2021. Whilst those responsible for the remainder of the victims killed by explosions, landmines and assassinations, remain formerly unknown and unclaimed.

The report documents 169 people killed by landmines in 2021. Most of the landmines are believed to have been planted in previous years and primarily by ISIS.

The report further documents the targeting of five hospitals and healthcare centres in Syria this year, as well as the death of five cadres who had worked in the emergency response and the injuries of 15 others. In addition to the targeting of six ambulances and rescue vehicles.

The Assad regime continued their policy of arbitrary arrests throughout the year, albeit at a decreasing rate than the previous year. Areas that had undergone ‘reconciliations’ with the regime, namely the governorate of Daraa and Rif Dimashq were the primary targets for arbitrary arrests, as the two governorates witnessed the largest number of arrests in 2021, respectively, as per the documentation of SHRC. SHRC also documented a rise in the arrests under the control of the Kurdish Autonomous Administration, at a rate equal to or greater than that within the regime-controlled areas. They further documented cases of arbitrary arrests in the regions controlled by the National Army and Tahrir al-Sham, albeit at much lower rates than those by the regime and the Autonomous Administration.

The report notes that the number of Syrian refugees has relatively stabilised since 201, as a result of the cessation of major military operations. However, this stability, with the continued increase albeit at decreasing rates, reveals the weak rates of “refugee return”, a project that Russia has adopted since 2018 and has sought to promote on both media and political levels.

As per the report, the year 2021 was marked by the legal movement across many European countries, especially Germany, in puttin on trial those accused of war crimes in Syria.

The year 2021 also witnessed a continuation of the international sanctions mechanisms that have been in force since 2011, if at an imposition pace relatively weaker than previous years.

It should be noted that the Syrian Human Rights Committee is an independent organisation, established in 1997, with its headquarters in London, and is one of the first Syrian human rights organisations. SHRC has issued an annual report on the human rights situation in Syria periodically, since 2001.