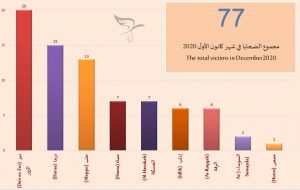 The Syrian Human Rights Committee documented the killing of (77) people in Syria during the month of December 2020, including: (15) children, (2) women, and (13) people who died under torture.

Deir ez-Zor province topped the rest of the provinces in terms of the number of victims, which reached (20) people, followed by Daraa province with (15) people, and then Aleppo province with (13) people.