You are here: Home / Editors choice / Three Massacres, Scores of Victims, by Regime Attacks on Idlib 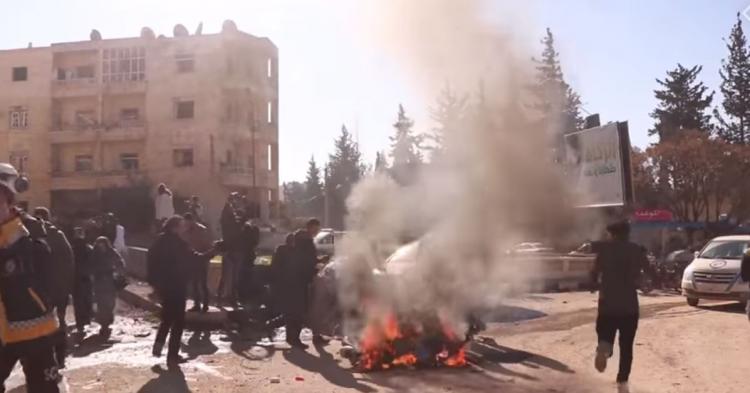 Idlib in the aftermath of a Regime attack

On Saturday, Idlib province lived a bloody day after the Assad regime warplanes committed three massacres in the city of Idlib and its countryside, killing dozens of civilians, most of them children, hours before the Turkish-Russian armistice entered into force in the province.

The Civil Defence said on its Facebook page that the regime’s warplanes committed three massacres in Idlib province, on Saturday, killing 20 civilians, and 97 wounded, most of them children and women.

The Civil Defence mentioned the death toll in the targeted areas, where eight civilians, including a child and two women, died and 39 others, including 10 children and 9 women, were injured in a horrific massacre of the “regime” in the city of Idlib, which they are targeting for the first time in months.

Also, “regime” warplanes committed a massacre in a popular market in the city of Binnish, near Idlib, killing seven civilians (three children and four women), and wounded 25 civilians, including 13 children and two women.

In the town of Neirab, “Regime” planes committed a third massacre, killing five civilians, including a child and two women, and 12 others, including four children and four women, were injured by raids targeting residential neighbourhoods in the town.

Civil Defence teams documented the targeting of 24 districts in Idlib Province with 55 air strikes by “regime” warplanes, in addition to throwing 39 barrel bombs by “regime” helicopters, coinciding with the shelling with 80 artillery shells and 18 missiles carrying “cluster” bombs.

This comes one day before the cease-fire agreement came into effect in Idlib province, which was announced by the Turkish Ministry of defence, and Russia also announced the opening of three crossings in the Idlib and Aleppo countryside,