You are here: Home / SHRC's Reports / Daily reports / The Daily report of victims of human rights violations in Syria 24-8-2019 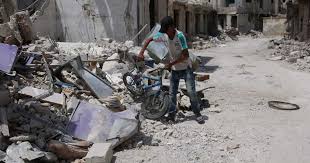 The total number of victims documented by the Syrian Human Rights Committee in Syria on Saturday 24th  August 2019 reached 3 persons including one killed under torture.

In Idlib province, two people were killed when a car bomb exploded in Al-Qusour neighbourhood at Idlib city centre.

In Daraa province, one person died under torture in a regime prison after a year of detention.