You are here: Home / SHRC's Reports / Daily reports / The Daily Report of Victims of Human Rights Violations in Syria 5-2-2019 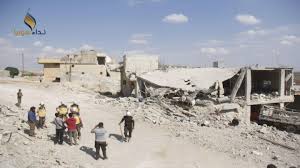 In the province of Deir ez-Zor, a woman died of her wounds due to an aerial bombardment carried out by the global coalition aircraft on the town of al-Bagoz on 29-1-2019.

In the province of Homs, a person died under torture in a prison of the regime forces, where his his death was learnt through the Civil Registry Department.

1 – Manal Majd al-Kadran / Deir ez-Zor – al-Mohasan / due to the bombing of the global coalition aircraft that targeted the town of al-Bagoz.

2 – Bilal Abdul Kafi Mohammed / Homs – Tel Zahab / under torture in a prison of the regime forces.