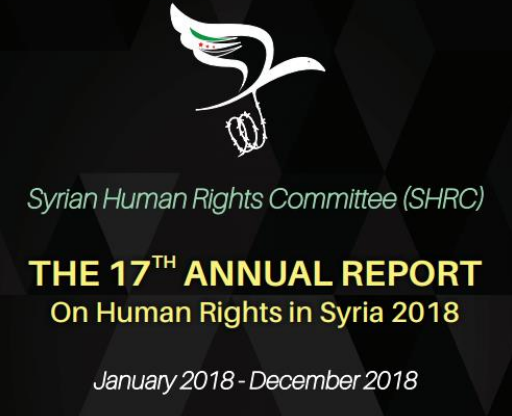 The Syrian Human Rights Committee (SHRC) issued its 17th annual report on the situation of human rights in Syria for the year 2018.

The report said that the Syrian regime topped the list of murder perpetrators with the number of those it killed estimated at (5121), followed by Russian forces at (701), the international coalition at (452), and ISIS at (424) people.

Russia reigned highest among perpetrators of massacres this year at 46%, followed by the Syrian regime at 29% and the international coalition at 10%.

This year witnessed also a sharp rescinding of ISIS, which had no longer controlled by the end of 2018 more than 1.7% of Syrian territory. This decline led to a reduction in crimes committed by it compared with previous years.

Noteworthy is that the genocide curve in the second half of this year has dropped dramatically compared to the first half, as well as with all previous years. This decline is due to the regime’s, and foreign forces supporting it, control over all areas once beyond its control in Damascus, Rif Dimashq, Daraa and Homs within the first six months of the year. This is in addition to the cessation of hostilities in the northern areas still controlled by the Opposition, either by de facto understandings or through Russian-Turkish agreements.

The year 2018 witnessed a significant increase in the number of explosions that occurred in Syria, especially in areas controlled by the Opposition, followed by areas under the control of the Kurdish self-Administration. These explosions occur via cars or motorcycles, or through explosive devices. No party claims responsibility for the blasts.

Arbitrary and despotic arrests of tens of thousands Syrian citizens have taken place this year. Large numbers of detainees have disappeared in prisons, detention centres, interrogation centres and the regime’s intelligence dungeons under the worst conditions imaginable in the world. SHRC has documented (835) deaths under torture this year. Most of these cases date back to previous years but the fate of the victims was revealed this year as part of a campaign launched by the regime mid-year to distribute death documents to hundreds of people who have forcibly disappeared since 2011 and later.

Fighters in Syria, particularly the regime and its foreign proxies, showed no respect of the symbolism of the medical and emergency aid sectors; on the contrary, they targeted them both intentionally and systematically. The targeting of hospitals was an easily identifiable pattern occurring at the onset of any broadscale attack on any city that fell under Opposition control.

In 2018, SHRC documented the targeting of (57) hospitals and health centres during that year.

In addition to systematically targeting civil defence cadres, headquarters and vehicles in previous years, the civil defence was the target of political defamation and incitement campaigns by the regime and Russia.

It is noted that the regime had stipulated, in its agreements with Opposition factions in Daraa in June, to exclude civil defence members from any of the agreement’s provisions, including allowing them to migrate to Idlib, a privilege given to all combatants. This rendered those members under threat of being targeted as they were not subject to any protection. Their status continued as such until they were allowed entry to Jordan after Germany, Canada and Britain pledged to shelter them.

This year witnessed a rise in the number of assaults on hospitals and their workers in Opposition controlled areas. This led to the suspension of some hospitals’ services either temporarily or permanently, in protest against the failure of the Armed factions in stopping the aggressors, and so as to protect the lives of their workers.

SHRC has documented the killing of (16) journalists and media activists during 2018, in addition to the assault, arrest and abduction of media activists perpetrated by various actors.

Violations and continuous crimes occurring since 2011 have led to the migration and displacement of more than half of the Syrian population from their homes. By the end of 2018, the number of Syrian refugees stood at 5.56 million, while the number of displaced persons was 6.1 million, of whom 1.57 million were displaced in 2018 alone.

The Syrian Human Rights Committee (SHRC) is an independent organisation, established in London in 1997. It is one of the earliest human rights group in Syria and consistent on issuing its annual report since 2001.

To view the whole report