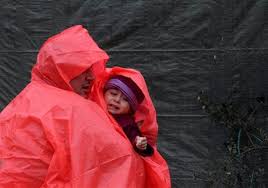 The total number of victims documented by the Syrian Human Rights Committee on Sunday 13-11-2019 reached three persons including a child.

In the province of Aleppo, a two-month-old infant died in the Bab al-Nairab neighbourhood of Aleppo due to severe cold and inability of her family to buy fuel for heating.

In the province of Idlib, a person was killed by a bombardment by the regime forces that targeted the town of Al-Najiah in the western countryside of Jisr al-Shughour.

In the province of Quneitra, a person was killed during raids by the regime forces on the townof Ain Farikha in the southern countryside of the province.

1 – the infant Ghina, two months old/ Aleppo – Bab al-Nairab / due to severe cold and inability to buy  fuel for heating

2 – Mustafa Sherif / Idleb – Marj Zohour village / because of artillery shelling on the town of Al-Najiah.