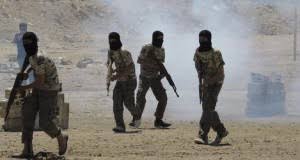 The total number of victims documented by the Syrian Human Rights Committee on Wednesday, 9-1-2019 reached 8 persons amongst them two children.

In Deir ez-Zor, three people were killed, two of them shot dead by unknown gunmen in the village of Abu al-Nitel and in the town of Suidan al-Jazeera, and one person was killed in a landmine explosion left behind by ISIS in Hajin town.

In the province of al-Raqqa, a child was killed by a motorcycle explosion in Al-Nour Street in the city of al-Raqqa.

A person was also killed in al-Hasakah province by unknown gunmen. His body was found on the bank of the northern Khabur river, and he had been suffocated and tortured.

In the province of Idlib, two person were killed: one of them in a car bomb explosion near the roundabout Shammat in the city of Idlib, and the other was shot dead by unknown people in the city of Jisr al-Shughour.

In Homs province, a three-year-old girl died in Al-Rukban camp due to the cold weather and lack of money to buy fuel for heating.

1 – Sumaya Mohammed Salem – child-  3 years / Homs – Palmyra / due to severe cold and the lack of fuel for heating.

3 – Hamza Asaad Al-Abd Al-Hadi / Deir ez-Zor – Hajin / due to the explosion of a landmine left behind by ISIS.

4- Othman Jumaa al-Rukan / Deir ez-Zor / Killed by unknown killers in the Flitah area in the desert of Abu al-Nitel village.