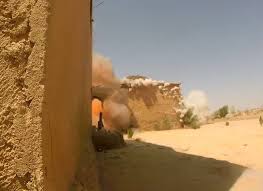 The total number of victims documented by the Syrian Human Rights Committee on Monday 7-1-2019 was one person.

In Deir ez-Zor province, one person was killed by a landmine explosion while inspecting his home in the town of Hajin, which was under the control of ISIS.

Abd al-Oweid al-Ramdan / Deir ez-Zor -Hajin / following the explosion of a landmine while inspecting his home in Hajin city.