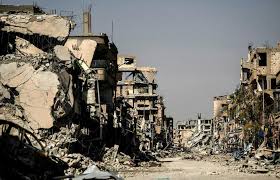 The total number of victims SHRC was able to document in Syria on Thursday 25-10-2018 reached 5 persons, including 3 children and 2 died under torture.

In the province of al-Raqqa (3) children were killed by a bomb from the remnants of shelling while they were playing with it in the town of Solok in the northern part of the province.

In the province of Rif Dimashq, 2 brothers were tortured to death in the regime prisons.