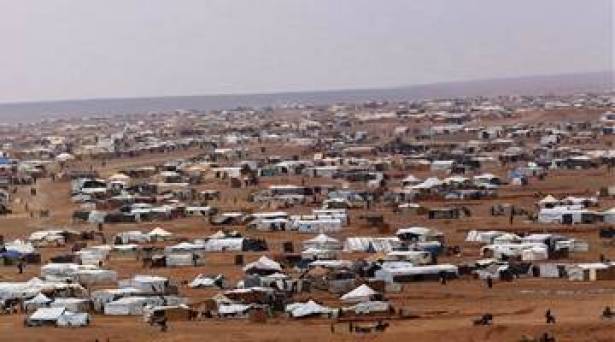 Al-Rukban camp is located in the triangle area on the Syrian-Jordanian-Iraqi border, in the south- eastern part of Syria, within the Syrian side of the demilitarized border area between Jordan and Syria.

The camp is located about 12 km south of the Tanf border crossing with Iraq, about 25 km from the military base of the International Coalition and within the 55 km area of Al-Tanf base, which is designated by the international coalition forces as a protected area. The regime’s forces and allies are banned from entering through temporary understandings with Russia.

The camp stretches along 7 kilometres, in the middle of the arid Al-Hamad desert, where no desert plant is inhabited, desert animals are scarce, water is scarce, and severe climatic conditions, such as frequent sandstorms, high temperatures in summer and extreme cold in winter.

The camp was set up in mid-2012 to be a transit point for the displaced to enter Jordan, then officially transformed into a camp in late 2014; and a transit area until October 2015.

One third of the camp’s displaced Syrians are from the governorate of Homs and its villages, who fled their areas as a result of the battles between ISIS and the forces of the regime in Palmyra and other areas. The rest of the displaced are from Raqqa, Deir ez-Zor, al-Mayaden, Al-Bokmal and Daraa.

Most of these displaced people live in worn out tents due to severe weather conditions, as well as a limited number of mud houses built by their owners at their own expenses.

Since the middle of the year, Russian officials have begun to promote the idea of ​​ending the status of the camp within the American sphere of influence by accusing it of becoming a haven for insurgents and terrorists. The Russian Foreign Minister also stated that there are understandings with the United States about the need to open Al-Rukban camp as soon as possible. Under the supervision of the United Nations, to withdraw refugees from there so that they can return to their homes, and then renewed the statements after a month by Nikolai Portsev representative of the Russian Foreign Ministry, which indicated that “the Americans propose to resolve the crisis of Al-Rukban camp to withdraw refugees to areas under the control of the government forces, ” the Jordanian Foreign Minister announced earlier this month, the beginning of serious talks with the Russians to dismantle Al-Rukban camp, and create conditions for the displaced, which encourages them to return voluntarily to their areas.

The general situation in Al-Rukban camp

It was announced on 16/6/2016 the formation of “the Palmyra and the Syrian Badia Tribes” inside the camp. The Council is composed of fifteen members. In early 2017, it was announced the formation of a local council for the camp, run by 27 tribal chiefs, to organise civil affairs, particularly with regard to the distribution of relief, education and security control.

There is no official statistics on the number of residents of the camp due to the absence of relief organisations and the high level of movement from and to the camp, such as the relocation of the residents of Al-Hadlat camp on the Syrian-Jordanian border to Al-Rukban camp in 2017 due to the escalation of the regime’s military operations in Qalamoun, or the return of some camp residents to their areas.

According to statistics issued by the media official of the civil administration in the camp, at the beginning of 2018 there were a total of (15231) families in the camp, ie about 78450 people, 13905 married men, 17503 married women, Of children, unmarried and married, of whom 39970 are children under the age of 15 years.

The United Nations Office for the Coordination of Humanitarian Affairs in Syria estimated the population of the camp at the end of September at about 50,000.

The camp contains 17132 tents, in addition to a number of clay houses. In addition, there are around 40,000 people in the surrounding areas, which are distributed in neighbouring areas such as Zarqa, Al-Hakl and Al-Dakaka .

The camp is under the control of a group of Badia factions belonging to the Syrian opposition. The most important of these factions are the Free Army of the Clans, the Revolutionary Commanders’ Army, as well as groups affiliated with the Martyr Ahmed Al-Adbo Brigades, the Martyrs of al-Qaryatain, Army of Al-Sharqiya lions, “where the elements of these factions reside with their families within the camp.

Al-Rukban camp is the largest camp for internally displaced people in Syria. It suffers from a clear neglect and a lack of all kinds of services, almost completely absent from international and regional organisations and bodies, to which there has been little assistance, and which has been suspended since February 2018 on the pretext of the difficulty of delivering them.

With the scarcity of relief aid, the smuggling of goods and foodstuffs to the population has become the only way to secure the necessities of life through smuggling routes from the governorates of (Sweida, Homs, Aleppo, Deir ez-Zor and Damascus), which were under the control of the Badia factions such as Al-Shariya Lions and Ahmad Al-Abdo

The residents of the camp relied on the supply of drinking water on the Jordanian side, which provided them periodically with water of  calcareous nature, which is  refined inside the Jordanian territory, and then transported by tank to the camp, but this process was not regular, even before it stopped completely, This obliged the camp residents to collect rainwater, in addition to relying on the water of the nearby well of Al-Dakaka, although its water is salty and unfit to drink.

The United Nations Office for the Coordination of Humanitarian Affairs (OCHA) in Syria announced on 23 September that it is ready to provide food, water and health care once guarantees and approvals have been obtained and all parties have allowed the delivery of humanitarian assistance, however, there has been no development on this subject.

There are no commercial or relief activities in the camp, with the exception of a few small shops, with almost no jobs opportunities. The camp residents receive no material support from any organisation like the rest of the camps inside and outside Syria, exacerbating the economic and living conditions. Most families live below the poverty line, and many people rely on begging and searching for waste for food, while others depend on limited amounts of money and assistance from their relatives and children outside the camp.

As a result of the difficult economic conditions, smuggling of food and the movement of goods becomes active, especially the smuggling of individuals to and from the camp, where the cost of smuggling of displaced people fleeing fighting with ISIS to Al-Rukban  camp earlier to 250 thousand Syrian pounds per person, while reaching the cost out of the camp After the siege to $ 1000, through a unpaved road to the Mansoura area by motorcycles, and does not exceed the success rate of passing by 50%.

Looting and road cutting have also spread, in addition to the trafficking in banned stuff such as narcotics and cannabis, and dealing with smugglers to obtain these materials.

There is no medical attention available to the camp to suit the size of the required needs, in view of the near presence of ISIS and their targeting of the only hospital established by Médecins Sans Frontières from prefabricated units. This targeting led to the exclusion of all organisations from work in this area. The military factions struggled for influence, particularly between the “Al-Sharqiya Lions Army” and the “Free Army of the Clans”, which was an additional reason for the reluctance of the organisations, especially the medical ones, to work.

The latest report by the Coordinating Unit of the Northern Syrian which belongs to (SSU) showed that 14 people died during the first half of October 2018, including 4 children and 3 women, while the number of people infected with hepatitis in the camp was estimated at 900, Of children, while skin diseases, diarrhea, sand and gravel in the kidneys, rodents, scorpions and rats are very common among the population, especially children.

There are currently no regular schools within the camp, making all children outside the educational process for several years. In previous years, an attempt was made by one of the Syrian organisations to establish a small school with a capacity of 400 students, but it stopped after a period of time.

Some residents of the camp try to compensate for this through voluntary educational activities by transferring them to some tents or mud rooms for modest classes of education. However, these initiatives are individual, unsupported and irregular, and accommodate very small numbers of children who make up half of the camp population.

Siege … as the  Russian pressure paper for political gains

The siege began to tighten on the camp since the military operations on the western Qalamoun and the Daraa area. In addition, the closure of the border crossing into Jordan last June under pressure from Russia and the closure of the road of Al-Dhomair by the forces of the regime.

The blockade was fully implemented on 2 October 2018, when the regime forces at the checkpoint of the triangle, some 70 km away from the camp, prevented vehicles from entering the camp, except for those carrying fodder for livestock in the area.

Regime forces told the camp residents by motorists that they had no choice but to reconcile with the regime’s forces, or to ask the US base to open another road and provide food aid; as long as the camp was within its 55 km radius It is forbidden for the regime’s forces to advance to it on the basis of previous Russian-American consensuses

The closure of the road resulted in a total cut in food materials, which led to a significant increase in prices. The price of the flour bag reached 17000 SP, the price of tomato 700, cucumber 900, sugar 1000 SP per kilogram, while the price of gasoline was 1500 SP per litre. SQ, which prompted residents to search among the waste for plastic residues and flammable materials as an alternative to fuel for heating and cooking.