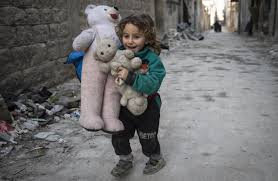 children in Syria are killed by ISIS mines

The total number of victims SHRC was able to document in Syria on Saturday, September 22, 2018, reached two children.

In the province of Raqqa, a child died of a landmine explosion left by ISIS in the village of al-Dhili’ before withdrawing from it.

In Deir ez-Zor province,  a child was also killed in in the town of Khasham by a landmine explosion left by ISIS.

1 – Aiham al-Haka/ Raqqa province – the village of al-Dhili / as a result of a landmine explosion planted by ISIS before withdrawing from the village.

2 – Yaser Abdullah al-Musallat / Deir ez-Zor – Khasham / due to the explosion of a landmine from the remnants of ISIS.