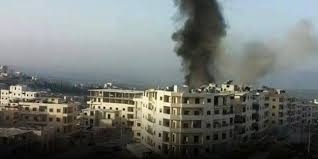 The total number of victims SHRC was able to document in Syria on Monday, 10-9-2018, reached 6 including a child.

In the province of Idlib (3) people were killed by a bomb explosion in front of a police office in the city of Salqin in the northern suburbs.

In the province of Aleppo, a girl was killed by the targeting her house by the regime’s artillery in the town of Birna.

In the province of Raqqa, a person was shot by the Kurdish militia SDF in the village of Rtala.

A person was also shot dead by unknown assailants in the town of Ghariba al-Sharqiya in Deir ez-Zor province.

1 – The girl Marwa Shalash / Aleppo province – Birna / due to the shelling of the town.

2- Mahmoud Taha al-Jada’an / Deir ez-Zor – Mayadeen / after an explosive device was detonated at the gate of the Selqin police office in the northern suburbs of Idlib.

3 – Khalaf al-Mukhlif al- Asaad Al-Daham / Deir ez-Zor – Al-Husain / Killed by unknown gunmen in the town of Gharibaha Al-Sharqiya, which is under the control of  SDF.