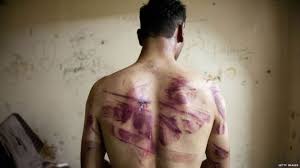 Torture in Syrian prisons of Assad

The total number of victims SHRC was able to document in Syria on Wednesday 8-8-2018, was 7 including 5 persons died under torture.

In the province of Aleppo, 6 people died, including 4 died under torture in the prisons of the regime forces, 1 was assassinated by unknown persons in the town of Kafrnaha and 1 died affected by his wounds due to a landmine explosion while attempting to dismantle it in Afrin suburbs.

In the province of Rif Dimashq, a person from Douma who was deported to the north and return to his town, arrested by the regime forces and then handed over his body to his family.