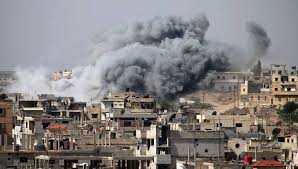 The total number of victims SHRC was able to document in Syria on Monday 6-8-2018, reached 4 people including 1 died under torture.

In the province of Daraa (2) were killed in the explosion of a landmine planted by ISIS in a house in the town of Nafaa.

In the province of Rif Dimashq  a man died under torture in the prisons of the regime forces. Another person died of his wounds from a landmine that he was dismantling.