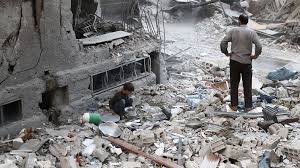 Shells fall on an Aleppo area leaving it into rubble

The total number of victims SHRC was able to document in Syria on Friday, 3-8-2018,  reached 14 including two children, a woman and nine persons died under torture.

In the province of Aleppo, 4 people were killed due to the fall of unidentified shells on Al-Muhandisin neighbourhood in the west of Aleppo.

In the province of Idlib, a person was killed in a bomb explosion from the remnants of the bombing on the city of Maarat al-Nu’man.

The Syrian Human Rights Committee documented the details of 10 victims which  can be viewed on the Arabic web link.