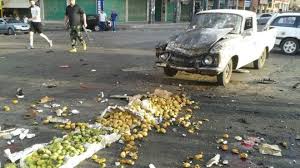 The explosions were preceded by attacks by armed elements from the organisation, often the suicide bombers were among themselves, against the villages of Shbaki, Tarba, Dama, Shurahi, Mtouna and Ghaita in rural Suweida.

Local militias killed gunmen who said they were also trying to blow themselves up. Their bodies were stoned in the streets, and the three bodies were hanged on a bridge in Suwayda in a gathering of gunmen and civilians.

Russian officers visited Swaida on Monday and met with the religious sheikhs in the province to persuade them to return the province to full control of the regime, but these talks did not appear to have been successful.

Local militias manage security in the province, and these militias are under the supervision of Druze religious sheikhs. The Druze authorities also refused to serve the youth of the province in the army since the popular protests began in 2011, leaving about 50 thousand defaulters from compulsory service.