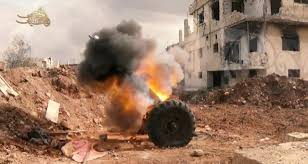 The total number of victims we were able to document in Syria on Sunday, 22 July 2018, reached 10 including: a child,  a woman and (6) people who died under torture.

In Daraa province, 4 people, including 3 persons, were killed by a previous bombardment of the Tseel and the Sahm al-Golan, and  (1) person died under torture in the regime forces prisons.

In the province of Hama one person was killed as a result of artillery shelling on the town of Kafr Zeita.

SHRC was able to document the death of 5 persons died under torture in the prisons of the regime forces and their parents were informed of their deaths while issuing family documents from civic centres. (2) in Hasaka province, (2) in the Rif Dimashq province and (1) in Deir ez-Zor province.

The Syrian Human Rights Committee was able today to document the  details of 10 victims whose names and details are available on the Arabic web link : http://www.shrc.org/?p=32412