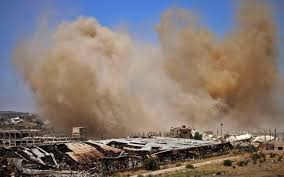 The total number of victims we were able to document in Syria reached 11 on Wednesday, 18-7-2018, including: 3 children and a woman and 1 under torture.

In the province of Deir ez-Zor (2) people were killed, one of them in a mine explosion planted and left by ISIS in Badia Thiban on the road of the Al-Omar oil field and the other following clashes between the Kurdish militia of SDF and the cells of the ISIS in the town of al-Zer.

In the province of Aleppo, a member of the Free Police in the city of Izzaz was shot dead by stray bullets at the checkpoint “Izzaz – Kafr Kalpin” in the northern suburbs.