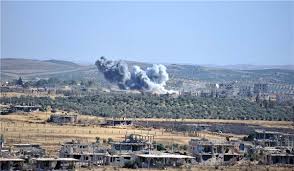 The total number of victims that SHRC was able to document today Saturday 14-7-2018 reached 5 people among them 1 child, 1 woman and 1 died under torture.

In the province of Hama, 3 people were killed due to the Syrian regime artillery shelling on on Lahaya village while people were reaping al-Shaflah herbs.

In Idlib province, one person died affected by his wounds from previous shelling of Jesr-al-Shughur city.

In Latakia province, one person died under torture in the regime prisons in Jablah city.

SHRC was able today to document the details 5 victims whose names and details are available on the Arabic website link (http://www.shrc.org/?p=32357   ).