You are here: Home / SHRC's Reports / Daily reports / Daily Report on the victims of the human right violations in Syria, 10-6-2018 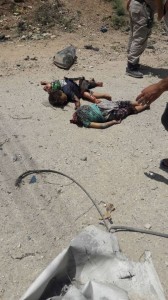 The number of victims SHRC managed to document in Syria on Sunday 10-6-2018 reached 37 people, amongst them 12 children and 2 women.

In Idlib province 12 people were killed due to the bombing of the towns and cities of the province. They were distributed as: 12 people in Taftanaz because of targeting children hospital, 3 people in Ram-Hamadan and 2 in each of Ariha and Binnech.

In Hama province 10 people were killed amongst them 8 by targeting their vehicles on the road between al-Ankawi- Qilidin, 1 by a landmine in the children bus which he was driving and 1 targeted by heavy machine guns during his sheep-raising.

In Aleppo province 4 people were killed by a landmine in Tal-Rifa’at city. in Daraa province one person was killed by an explosive device planted in his car.

Three people were killed by landmines left by ISIS in Raqqa province.

The Syrian Human Rights Committee documented the names and details of 16 victims, for the names and further information, please refer to the Arabic web link: http://www.shrc.org/?p=32119