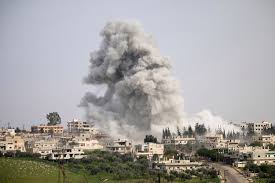 The total number of victims in Syria on (Friday 18/5/2018) as documented by SHRC is 3 people including 1 woman.

In the province of Idlib, 2 persons were killed by an explosive device in Khan Sheikhoun in the southern countryside.

In the capital Damascus, 1 person was killed due to the regime shelling of Yarmouk camp in the southern part of the city.

SHRC was able today to document the details of 3 victims as described in the Arabic link (http://www.shrc.org/?p=31999 ) .