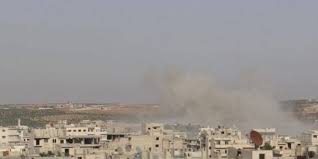 The total number of victims in Syria on (Sunday 13/5/2018) as documented by SHRC is 7 people including 2 persons died under torture.

In the province of Hama, 3 people died, one due artillery shelling of al-Qahira village, another one died affected by his wounds on one of the vehicles transporting forced deportees from the southern countryside, and a third one died under torture in Sednaya military prison.

In the province of Aleppo, 2 persons were killed in Afrin countryside, one by Ahrar al-Sharqia faction and the other under torture at Abu Amsheh  battalion.

In the province of Idlib, a man was killed by the Turkish gendarme while trying to cross the borders.

In the province of Deir ez-Zor, a man was killed in a quarrel   with the Turkish militia of Syrian democratic forces at al-Shanan town.

SHRC was able today to document the details of 6 victims as described in the Arabic link (http://www.shrc.org/?p=31972).