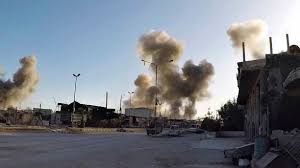 The total number of victims in Syria on Friday 11-5-2018 as documented by SHRC is 6 people including 2 women and 2 people died under torture.

In the capital Damascus, 3 people died, 2 were killed by the rocket shelling of Yarmouk refugees camp south the capital and 1 due to the explosive bullets launched on al-Zahira neighbourhood.

Two persons died under torture in the regime’s detention centres, one in the province of Hama and the other in that of Daraa.

In the province of Aleppo, a man died due to the explosion of a landmine planted previously by the Kurdish militias in Afrin countryside.

SHRC was able today to document the details of 4 victims as stated in the Arabic website on this link (http://www.shrc.org/?p=31959 ).