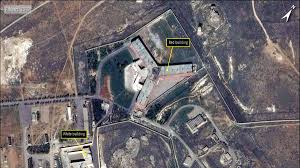 Sednaya prison where many victims killed under torture

The total number of victims in Syria on Thursday 10-5-2018 as documented by SHRC is 8 people including 1 child and 3 people died under torture.

In the province of Hama,3 people died under torture in the Syrian regime’s prisons after over than 5 years of detention.

In the province of Idlib, 3 people died, two were found dead after few days of vanishing and one was killed due to the Russian shelling on al-Naqir town.

In the province of Aleppo, one person died by the explosion of a landmine planted by the Kurdish militias in Afrin countryside.

In the south of the capital Damascus,   one person was killed due to the shelling of Yarmouk camp.

SHRC was able today to document the details of 8 victims as stated in the Arabic website on this link (http://www.shrc.org/?p=31953 ).