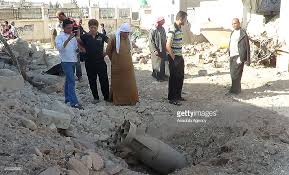 The total number of victims in Syria on Saturday 5th of May 2018, as documented by SHRC is 5 people including two children.

In the province of Aleppo, 2 persons were killed due to the explosion of a bomb left from previous shelling of Hayyan town.

In the province of Homs, 3 persons were killed by the explosion of an weapons warehouse in the northern countryside.

In the province of Idlib, one was killed on the hands of anonymous group at Kafr-Bunni town in the western countryside.

SHRC was able to document the details of 2 victims as stated on the Arabic website link (http://www.shrc.org/?p=31926 ).