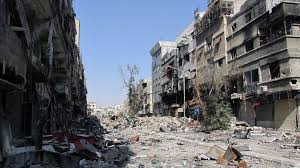 In the capital Damascus, (11) persons died including (7) due to the bombing of Yarmouk camp, and (4) due to the fall of a shell whose source is yet to identify on Naher Aysheh neighbourhood.

In the province of Aleppo, (5) persons were killed including (3) due to the bombing of Kafr Hamra town and (2) because of  the explosion of a landmine in Afrin.

In the province of Idlib, (4) persons were killeddue to the shelling of Ma’arat Hurma.

SHRC was able today to document the details of (13) persons whose information available on (http://www.shrc.org/?p=31874).