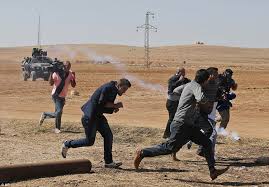 In the province of Idlib, (2) persons died: (1) was  killed by the Turkish borders guards whist trying to cross the borders, and the other (1) died affected by his wounds because of car bomb explosion in the industrial neighbourhood in the city of Idlib.

In the province of Daraa, (2) persons also died: (1) due to the regime’s shelling of al-Yadodeh town and the other (1) because of ISIS’s shelling of Hait town.

SHRC was able today to document the details of (3) persons whose information available on (http://www.shrc.org/?p=31863).