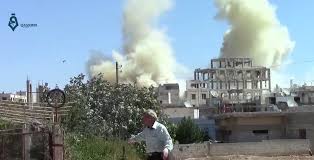 In the province of Homs, (3) persons were killed due to the artillery bombardment on al-Rustan Farms in the northern rural areas.

In the province of Idlib, (1) person died, affected by his wounds due to the Russian shelling of al-Naseem neighbourhood some days before.

In the province of Hasaka, a person found dead in his house, with traces of torture on his body.

SHRC was able today to identify (4) victims, whose details are available on the Arabic website link (http://www.shrc.org/?p=31819).