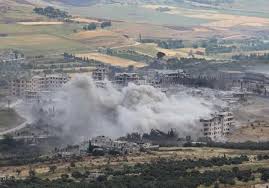 The total number of victims documented by SHRC on (Tuesday 10-4-2018) is (7) persons, including one child and two women.

In the province of Daraa, (2) persons were killed by an explosive device on the way between the towns of al-Sharai’ and al-Zahr in the area of al-Lajat eastern Daraa city.

In the province of Hama, (1) person was killed due to the shelling Kafr Zita city.