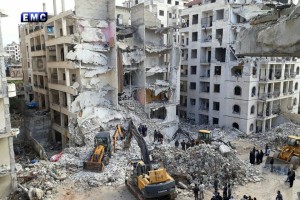 Building collapsed due to the regime’s shelling

In the province of Idlib, (19) civilians were killed, including (17) due to the shelling of al-Naseem neighbourhood which caused the collapse of 7 storey building, killing most of its residents, alongside (2) died by an explosive device at al-Harza village north to Dana city.

In the province of Deir ez-Zor, (4) persons were executed by ISIS.

In the province of Homs, (3) civilians were killed due to the shelling of Talbiseh city and al-Mokaramiyah village.

SHRC was able to identify the names and details of (3) victims, available on the Arabic website link (http://www.shrc.org/?p=31787 ).