You are here: Home / SHRC's Reports / Daily reports / The Daily Report of Victims in Syria (Tuesday 3-4-18) 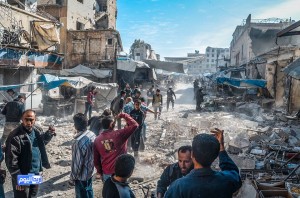 Ariha popular market after the massacre 3-4-18

The total number of victims in Syria on Tuesday 3-4-2018 as documented by SHRC is (11) persons including (2) children.

In the province of Idlib, (7) persons were killed when the popular market in Ariha and the towns of Kurin and al-Sukkaria were targeted by the Russian warplanes.

In the province of Deir ez-Zor, (2) persons were killed; (1) was shot dead by unknown individuals in al-Tayyanah town, whilst the other (1) was executed by ISIS on charges of extremism.

In the province of Hama, (1) person was killed due to the shelling of Qastoun village.

In the province of Raqqa, (1) person was shot dead by the Kurdish militia of Syrian Democratic forces at Al-Sawami’ chick point, northern city centre.

SHRC was able to document today(4) victims, whose details are available on the Arabic website link (http://www.shrc.org/?p=31751).