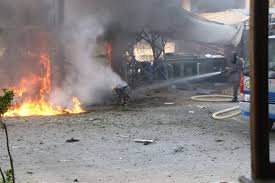 In the province of Rif Dimashq, (23) persons, all of them civilians, were executed by the Syrian regime forces upon entering the town of Kafr Batna in the Eastern Ghouta.

In the province of Idlib, (2) persons died, (1) was killed by the shelling of the town of Kafranbel, whilst a school girl died of heart attack for fear of an air raid on Jessr al-Shughur simultaneous to her exit from school.

In the province of Aleppo, (7) persons killed, including (6) of the same family, by landmines in the city of Afrin.

In Hasaka province, (2) persons were killed by landmines in the town of Ra’s al-Ain.

In the province of Hama, (1) person was killed due to the shelling of al-Jammalah village.

SHRC was able today to identify (11) victims, whose names and details available in Arabic on the Arabic website link (http://www.shrc.org/?p=31704).