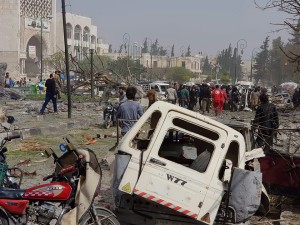 In the province of Idlib, (6) persons were killed, including (5) due to a car bomb, exploded opposite to al-Mohafazah hospital in the city of Idlib and (1) because of the shelling on the village of Kafr Ouwayed.

In the province of Hasaka (5) people died with “typhoid fever” resulting from drinking water distributed through tanks in the camp of al-Hol.

In the province of Daraa, (1) person was killed by a landmine in the Minshiah neighbourhood in Daraa Albalad.

SHRC was able today to identify (3) victims, whose names and details available in Arabic on the Arabic website link (http://www.shrc.org/?p=31698).