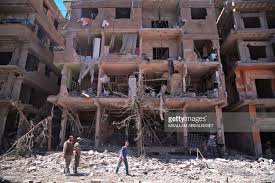 In the province of Rif Dimashq, (39) persons were killed due to the air strikes and artillery bombardment by the regime forces, Russian warplanes and Iranian backed militia on the towns of the Eastern Ghouta: (17) in Ain Terma, (11) in Arbin, (5) in Harasta, (3) in Hazzah and (1) in each of Ghouta, Zamalka and Douma.

In Idlib province, (5) persons were killed due to the bombardment on the city of Idlib.

in the province of Homs, (1) person was shot by a sniper in the city of al-Rastan.   In Deir ez-Zor province, (1) was killed by landmines left by ISIS in al-Kashkiah village.

In Daraa province, (1) was executed by ISIS a year ago, but his body was found today at the outskirt of al-Gharia town.

In addition to (3) persons were killed in Damascus,  of whom (2) were shot dead by ISIS in al-Qadam and the Japanese hospital point between Yarmouk camp and Yelda town. And (1) died under torture after 5 years in the regime’s prisons.

SHRC was able today to identify the names and details of (26) victims available in Arabic on the Arabic website link (http://www.shrc.org/?p=31590).