In the province of Rif Dimashq, (71) persons were killed due to the air strikes and artillery bombardment by the regime forces, Russian warplanes and Iranian backed militia on the towns of the Eastern Ghouta: (32) in Douma, (13) in Arbin, (12) in Harasta, (8) in Zamalka, (2) in each of Ain Terma and Jessrin and (1) in each of Madyara and Deir al-Asafir.

In Idlib province, (5) persons were killed including (4) due to the bombardment on Kafr Sajna and Binnesh and (1) shot by the Turkish border guards while trying to infiltrate into Turkish territory.

In Aleppo province, (1) was killed due to the shelling of Baston village by Sham Liberation group  during trying to break into it. Another (1) was killed because of the artillery bombardment on Qulaidin in the province of Hama.

In Daraa province, (1) was killed due to the artillery bombardment on Nahteh Town.

(2) also were killed in al-Okaishi town, Raqqa province due to landmines left by ISIS.

SHRC was able today to identify the names and details of (72) victims available on the Arabic website link (http://www.shrc.org/?p=31582) 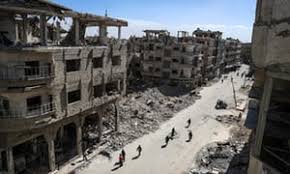