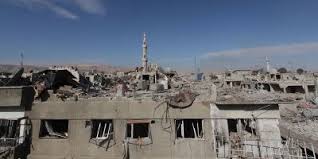 In the province of Rif Dimashq (53) persons were killed due to the regime, Russian and Iranian backed militia air strikes and artillery bombardment on thetowns of the Eastern Ghouta. Victims are divided as follows: (36) in Douma, (8) in Arbin, (5) in Harasta, and (1) in each of Saqba, al-Aftaris, Madyara and Jissrin.

In Idlib province, (9) persons were killed, (8) of them due to the bombardment of Kafr Sajna town and (1) due to the shelling of Madaya village.

In Aleppo province, (1) was killed due to the Turkish bombardment on Afrin rural areas.

In Homs province (1) was died under torture in the regime’s prisons.

In Hama province (1) was killed due to the shelling on Zafr Zita town.

SHRC was able to identify the names and details of (62) victims today available on the following link of the Arabic website (http://www.shrc.org/?p=31578)