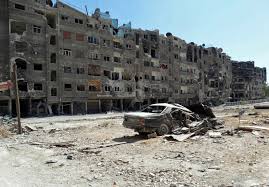 In the province of Rif Dimashq (42) persons were killed due to the air strikes and bombardment carried out by the Asad regime, Russian warplanes and Iranian backed militia on the towns of the Eastern Ghouta. The number of victims are divided: (27) in Zamalka, (9) in Jissrin, (6) in Misraba, (3) in each of Medyara and Sakba, (2) in Hazzah and (1) in each of Kafr Batna and al-Ghouta.

In Aleppo Province, (6) persons were killed: (3) due to the Turkish shelling of Trendat shelling of Afrin rural areas, (2) by landmine left by the Kurdish militia in Afrin rural areas and (1) al-Adnan mosque Mo’azen in Oram al-Kubra who was killed by automatic gun machine during performing Asr prayers.

In Deir ez-Zor province, (2) persons were killed due to the International coalition air strikes on al-Hajin city, (1) volunteer of civil defence was killed while helping the wounded in Hama rural areas, in addition to (1) killed due to bombardment on Jober neighbourhood in Damascus.

SHRC was able today to identify the details of (33) victims available on the Arabic website (http://www.shrc.org/?p=31569)