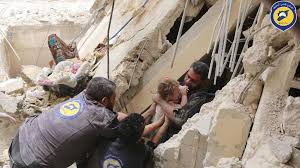 In the province of Rif Dimashq (91) persons were killed including (88) due to the regime – Russian bombardments and air strikes on the town of the Eastern Ghouta. Victims were distributed as (27) in Hamouriah, (17) in Saqba, (12) in Kafr Batna, (11) in Hazzeh, (6) in Misraba, (5) in Arbin, (3) in each of Jissrin and Douma, (2) in each of Madiyara and Harasta and (1) in Bait Sawa. (2) also were killed due to unknown mortar hit the public square in Jermana and (1) by a regime sniper in Harasta.

In Aleppo province, (15) persons were killed including (8) due the explosion of a car bomb targeted the checkpoint at Sad Bin Moaz Mosque in Jarablus, (4) due to the Turkish shelling of Afrin rural areas, (2) due to the collapse of previously hit building in Aleppo neighbourhood of Karm Aljabal and (1) due to a landmine in Afrin rural areas.

In Idlib province, (3) persons were killed due to the shelling of al-Ghassaniah village in Jisr al-Shughour and (3) were killed on the hands of the Kurdish Syrian Democratic forces in Al-Soor town in the province of Deir ez-Zor.

SHRC was able to identify the names and details of (50) victims, available on Arabic website (http://www.shrc.org/?p=31565)